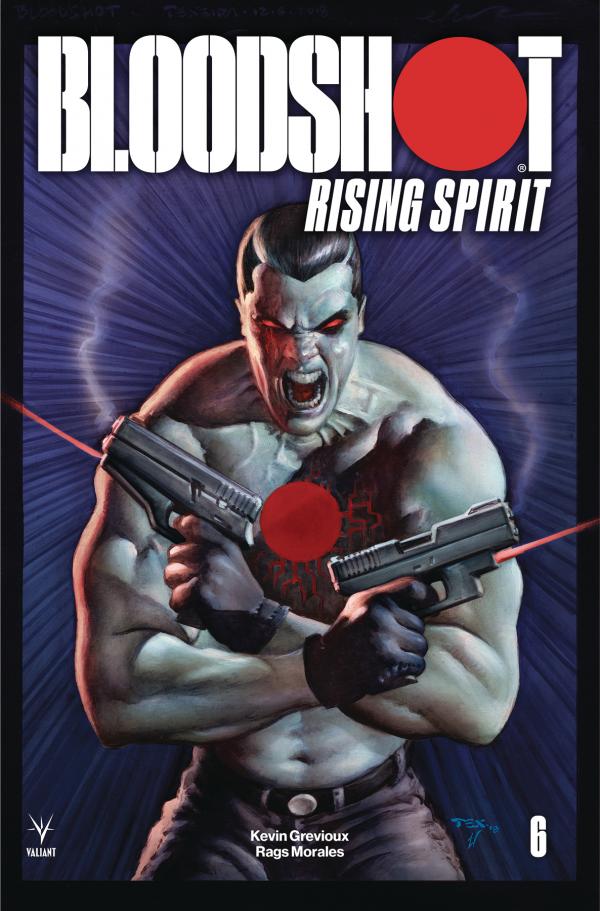 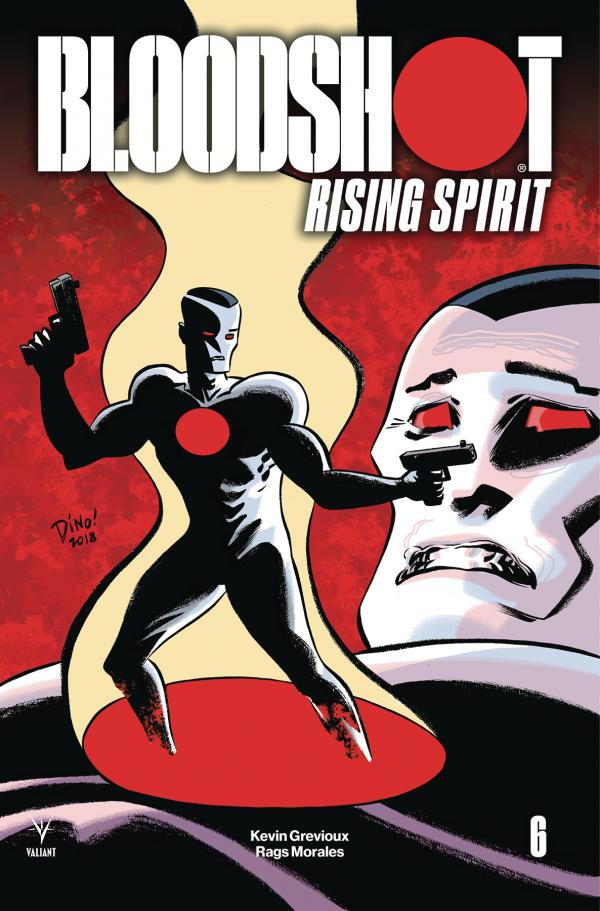 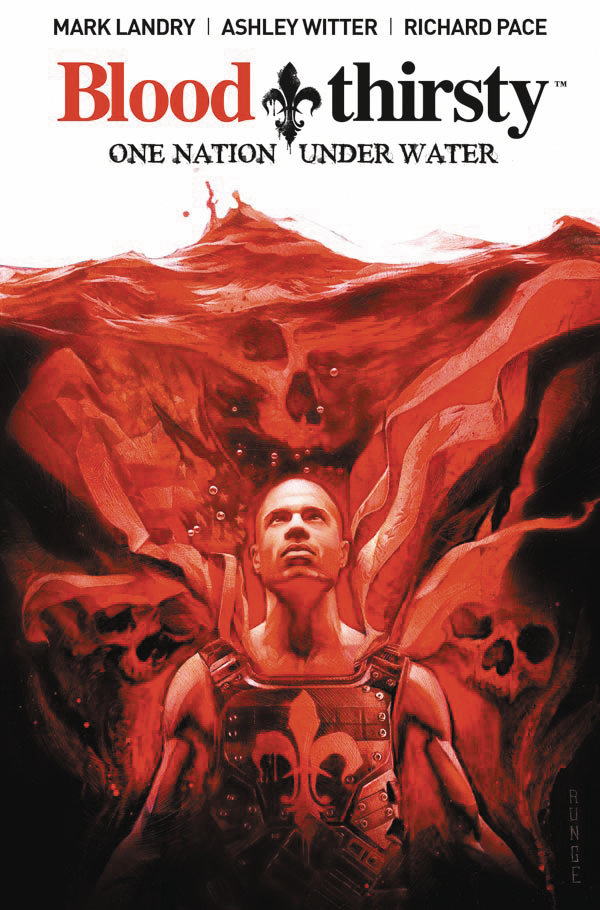 Haunted by the catastrophe that tore his city apart, Coast Guard veteran Virgil Lafleur struggles daily with the hardships of a post-Katrina New Orleans. But when his younger brother's murder leads him into a vortex of intrigue, corruption, and violence, Virgil becomes obsessed with bringing the killers to justice and exposing the horrific secret hiding beneath the Mississippi. Collects Bloodthirsty #1-5. 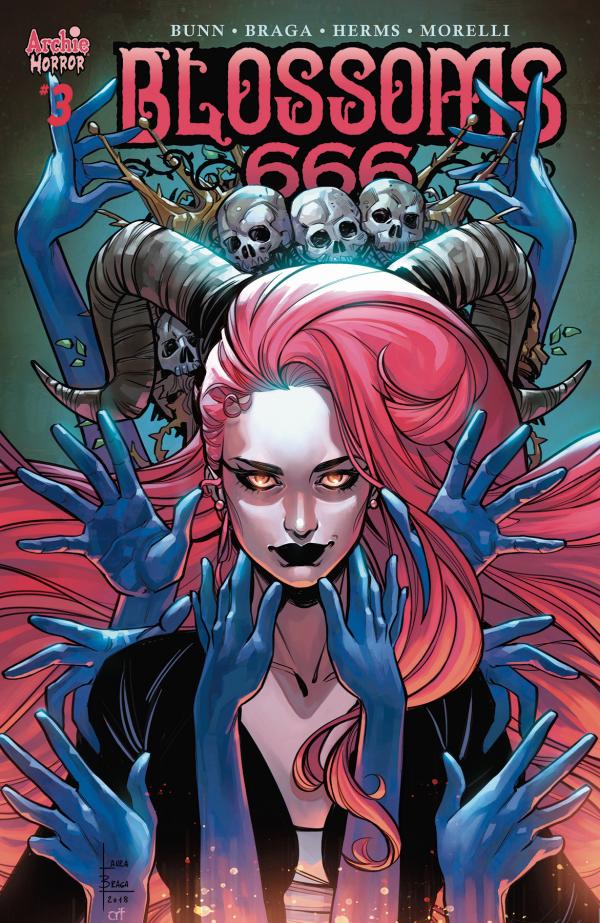 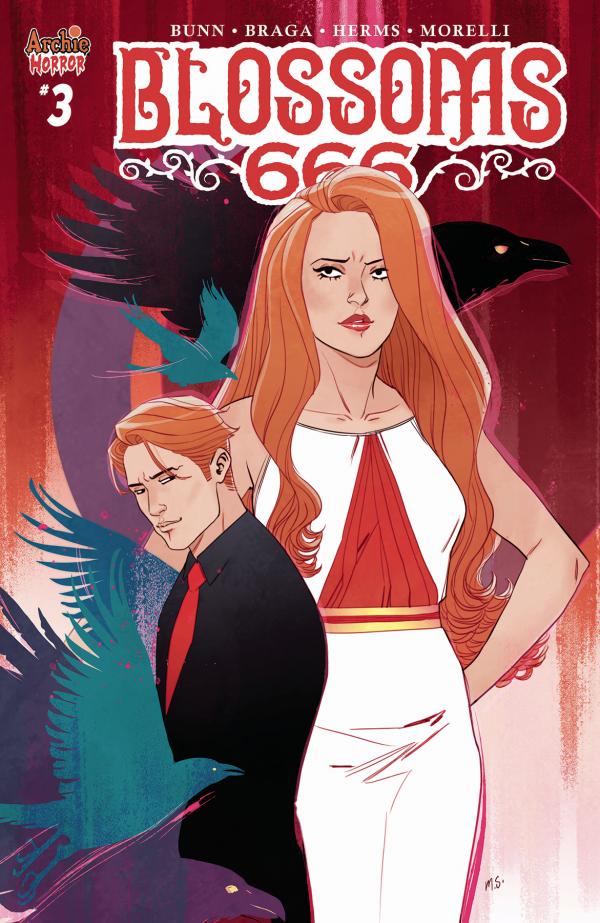 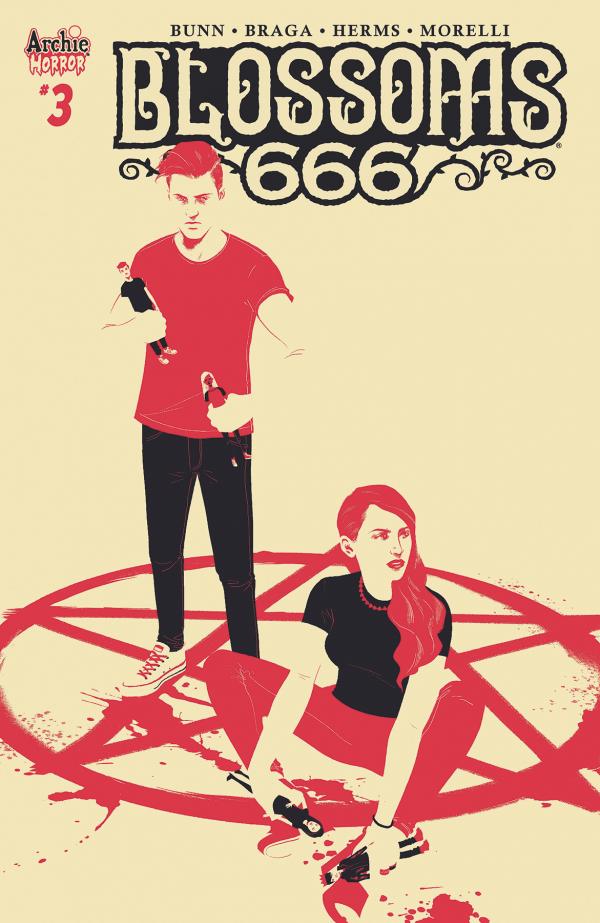 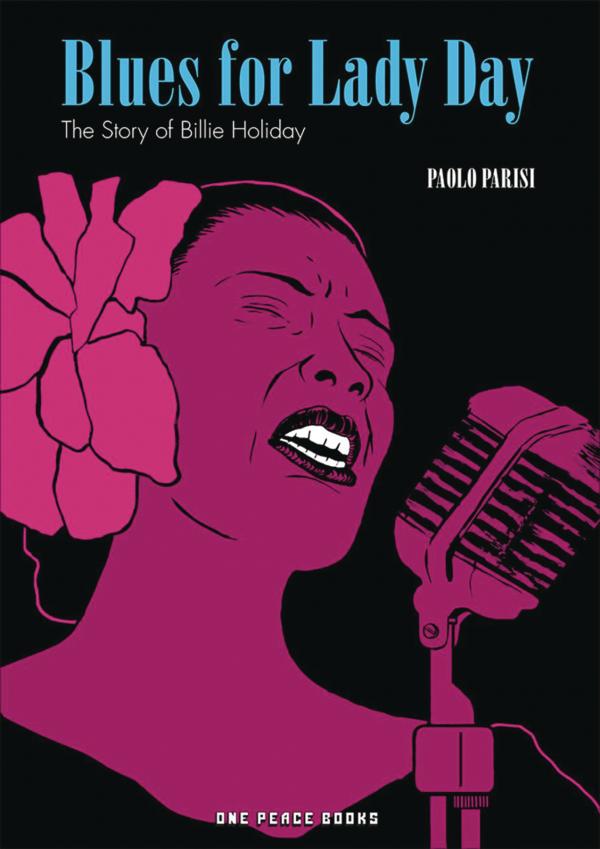 Billie Holiday, one of the greatest jazz singers of all time, had a troubled life: a childhood in poverty, brothels, jail, broken love, and a dependence on alcohol and heroin. Her first performances in the night clubs of prohibitionist America was where her pioneering vocal style was born?later to become a lasting influence on jazz, pop, and modern music to this day. Performing with jazz legends such as Lester Young, Louis Armstrong, Count Basie, and Artie Shaw, she became a true American icon. This graphic novel, told through short biographical fragments, is the story of Lady Day. 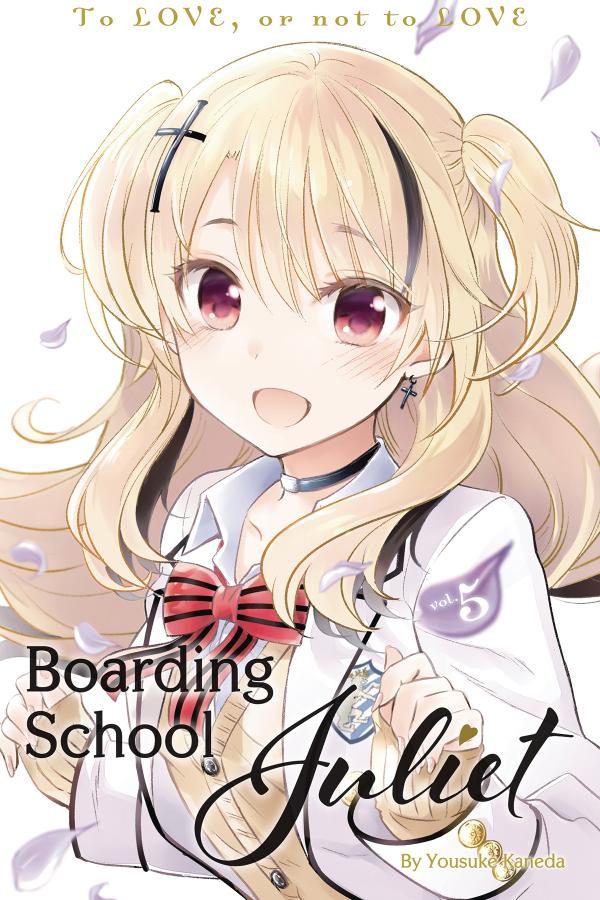 On the fair island campus of Dahlia, the student body is split into two rival dorms: The Black Dog House of the eastern nation of Touwa, and the White Cats House of the West. Despite his doting childhood friend and a loyal posse, the first-year leader of the Black Dogs, Romeo Inuzuka, has one big teenage problem: He has a crush on Juliet Persia, the first-year leader of the White Cats! With her own brainiac right-hand man and a powerful crew behind her, the cutthroat Juliet thinks she has no time for misadventures with a hopeless romantic like Romeo. When Romeo meets Juliet one fateful twilight, he thinks he has a shot at love... but is this secret affair really worth dying for? 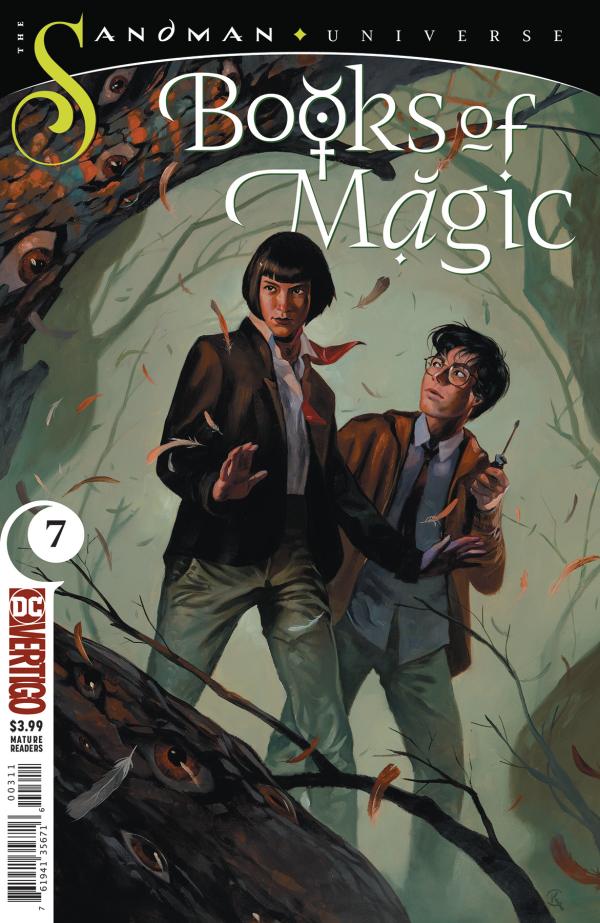 Tim and Rose go on a journey that takes them across time and space, to the land of Faerie. Tim has the strange sense that he's been here before, but surely if he'd been to a place so magical and beautiful, he'd remember it, right? 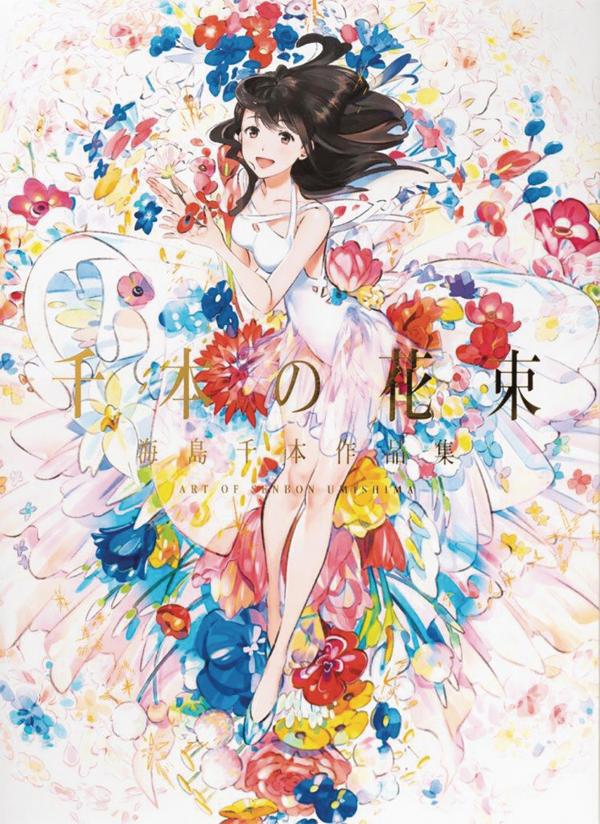 BOUQUET OF A THOUSAND FLOWERS ART OF SENBON UMISHIMA SC

The long-awaited, essential illustration collection showcases the illustrated works of the illustrator, animator, and manga artist, Senbon Umishima, including the artist's anime characters, landscapes, and selections from her own original manga stories. In addition to her illustrations, Umishima worked as animation director for She & Her Cat, the first animated work by the award-winning animator Makoto Shinkai, and has contributed to The Heroic Legend of Arslan and other anime series. Umishima's drawings are known for the way they illustrate body movement beautifully, while also expressing a sense of sentimentality. 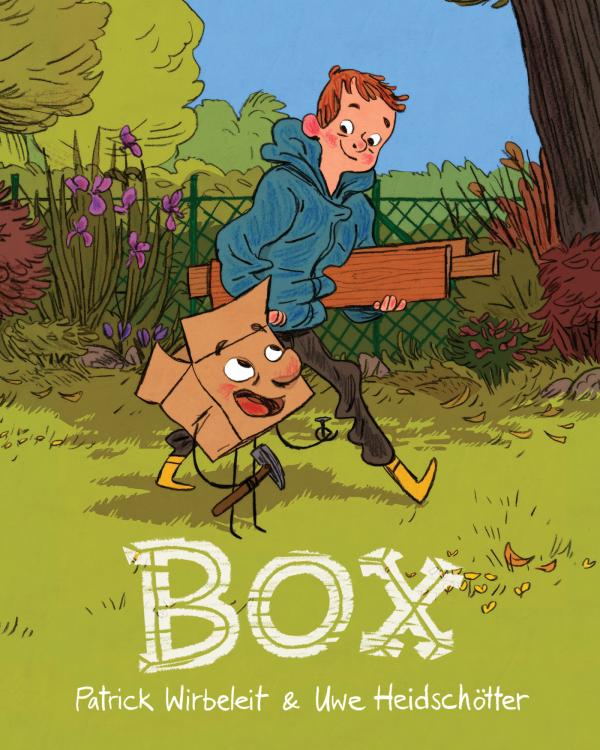 Advance solicited for June release! Matthew likes to build things. And invent things. So, finding a box sitting in front of his house one day is a real stroke of luck. But he has to pinch himself when it suddenly starts talking. A living toolbox! Even better, Box loves to invent things too, so the two become fast friends. But where did Box come from, and how did he get to be so magical? When his secret comes out and accidentally leaves Matthew's parents frozen, the two friends will have to race to find the answers and save the day. Winner of Best Comic for Young Readers at the Erlangen International Comic-Salon! 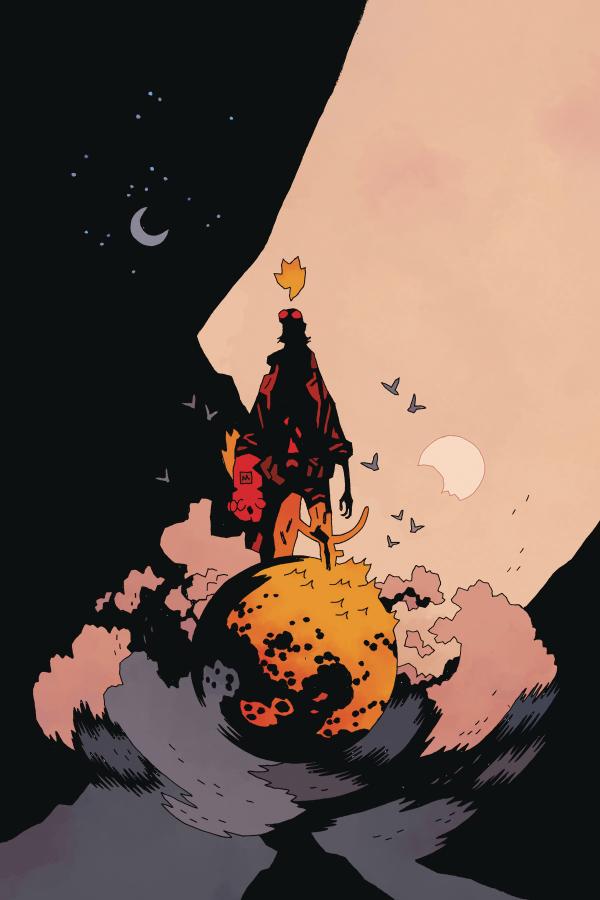 After fifteen years of B.P.R.D. comics, the series reaches its explosive conclusion! 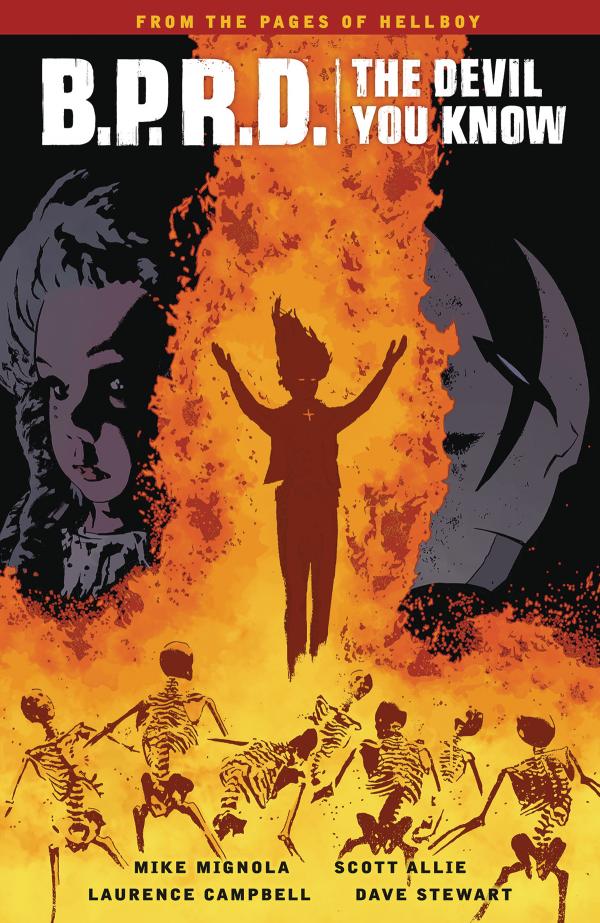 Before they were vanquished by the B.P.R.D., Lovecraftian monsters created a Hell on Earth. As society rebuilds, strange cults vie for influence, and the demon Varvara emerges to lead the way . . . Abe Sapien returns from his self-imposed exile to rejoin Liz Sherman just in time for the Bureau to face the final threat to mankind. Collects issues #1-#4. 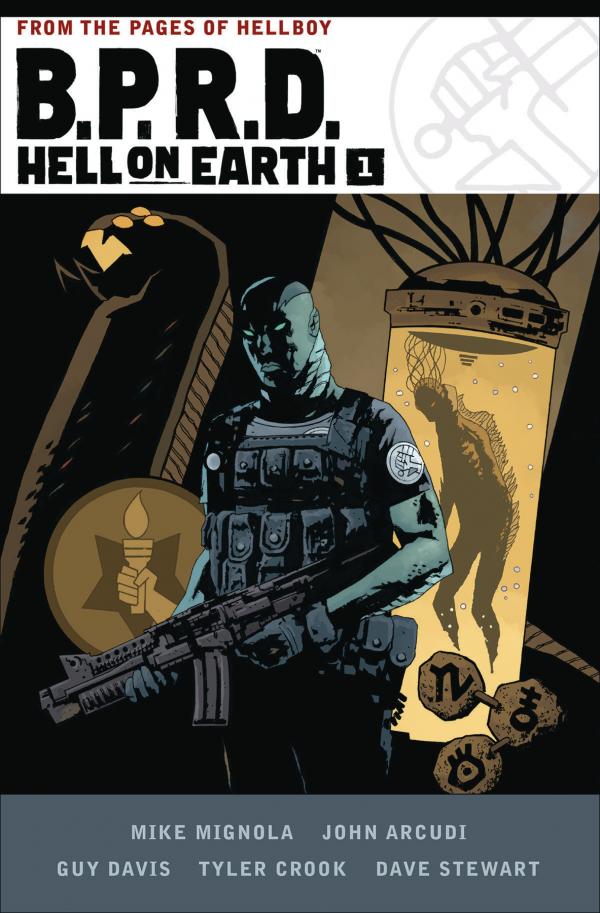 The plague of frogs has ended, but earth will never be the same, and the fractured B.P.R.D. struggles to battle dangerous monsters and humans alike, from a trailer-park cult to a Russian town ravaged by a zombie-like virus. Guy Davis's final B.P.R.D. story sets the stage for Tyler Crook's (Harrow County) backwoods-horror debut, as Liz Sherman hides from a world that she helped push toward armageddon, and Abe Sapien is shot down by a girl who's seen the world to come. This deluxe hardcover edition collects B.P.R.D. Hell on Earth volumes 1-3 plus an expanded sketchbook section. 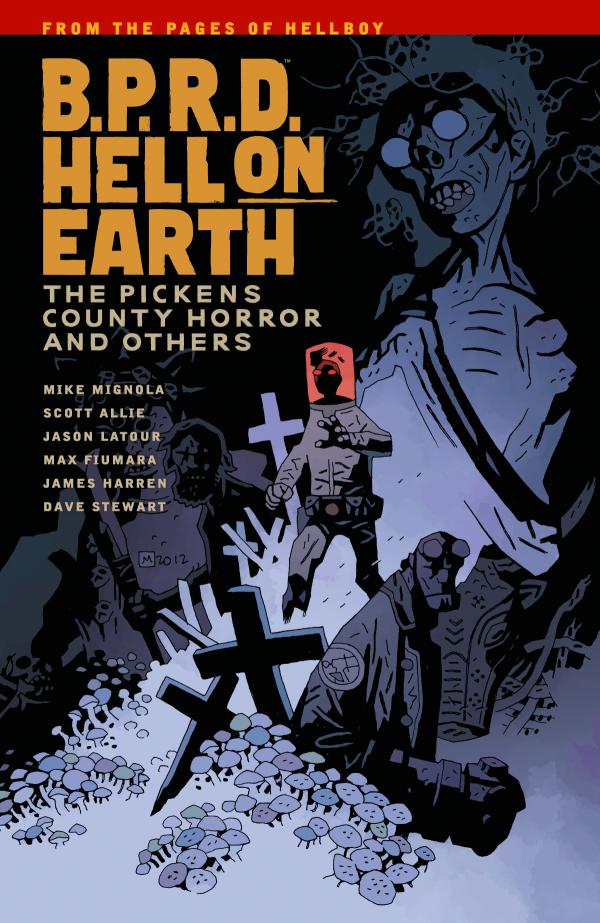 The B.P.R.D. crew investigates the site of a hundred-year-old magical ritual and Hellboy breaks into  the secret library of a dead necromancer. Collects The Pickens County Horror #1-#2, The Transformation of J. H. O'Donnell, and The Abyss of Time Parts 1 and 2. 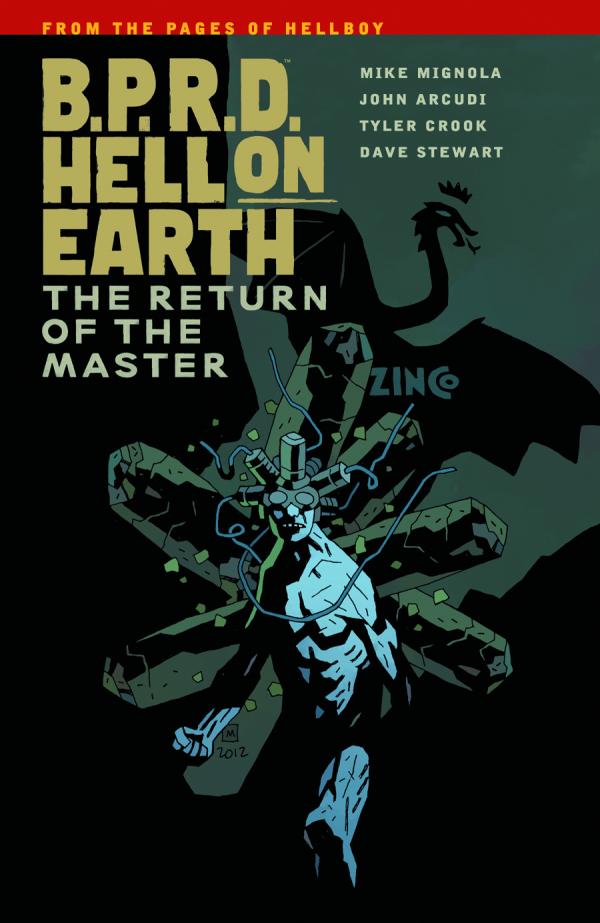 A rogue scientist who escaped the bloody massacre in B.P.R.D. Hell on Earth: Russia assembles a paranormal cult bent on world destruction. Can an elite B.P.R.D. task force hunt down the mad Russian's stronghold in time, or will monsters overwhelm a world already teetering on the edge of apocalypse? Collects B.P.R.D. Hell on Earth: The Return of the Master #1-#5. 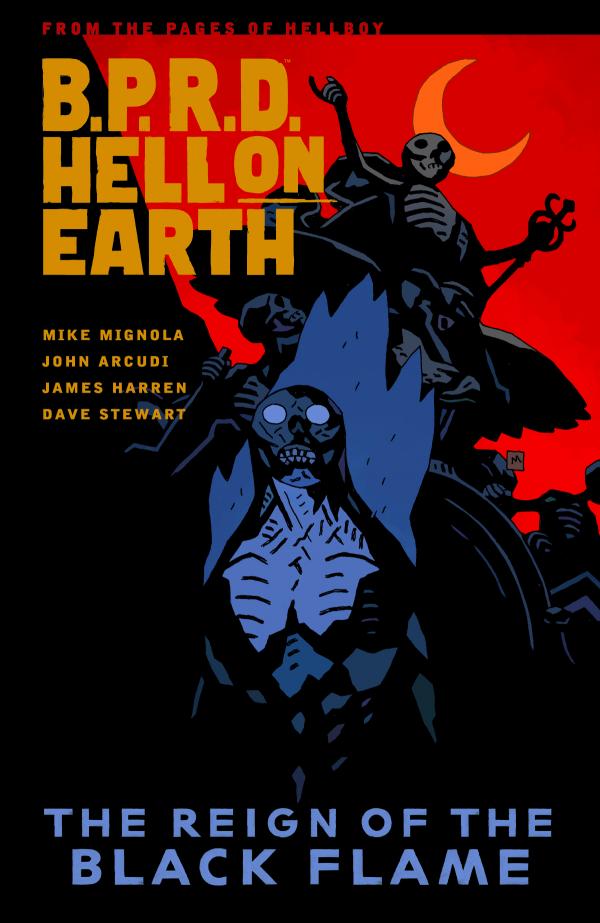 With Liz Sherman back in fiery action, two B.P.R.D. teams make their way through the monster-filled streets of the Manhattan wasteland in order to reach the Black Flame's fortress and take down his army. Collects B.P.R.D. Hell on Earth #115-#119. 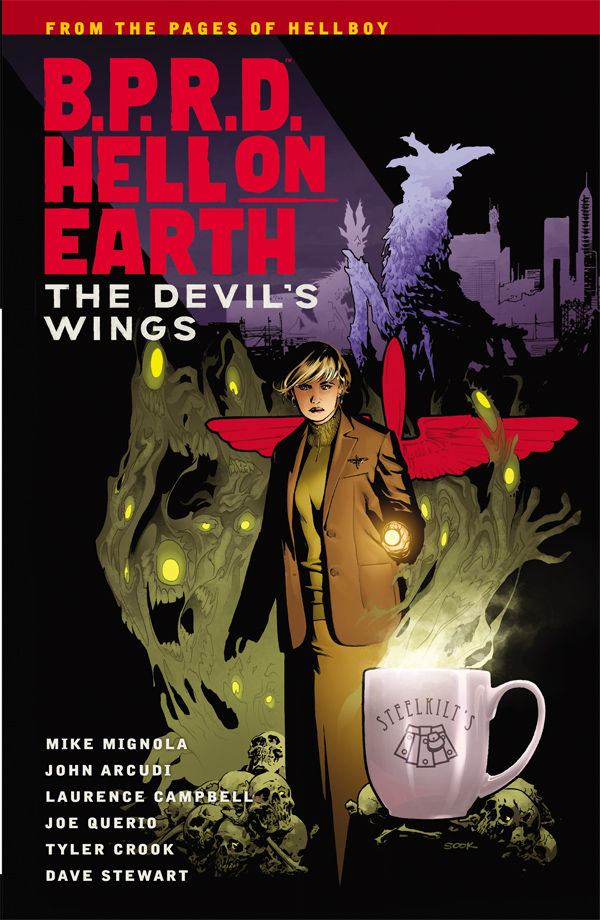 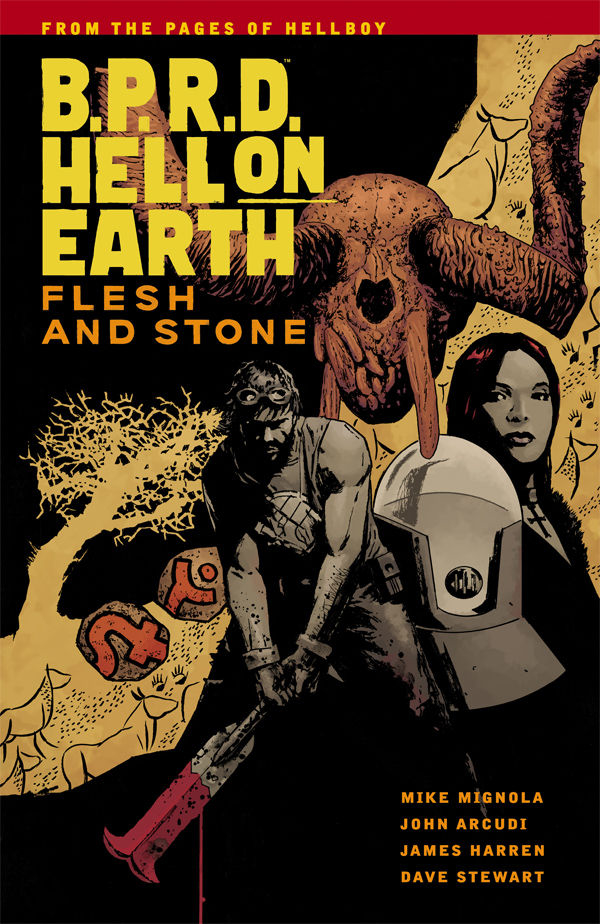 Things seem to be going well for the BPRD. With their alliance with the military, they now have all the munitions they need and, compared to what they faced in New York, an easy mission to clear a small town. But the town has strange connections to Howards's past as a prehistoric warrior, and more than its share of monsters. This volume collects B.P.R.D. Hell on Earth #125-#129. 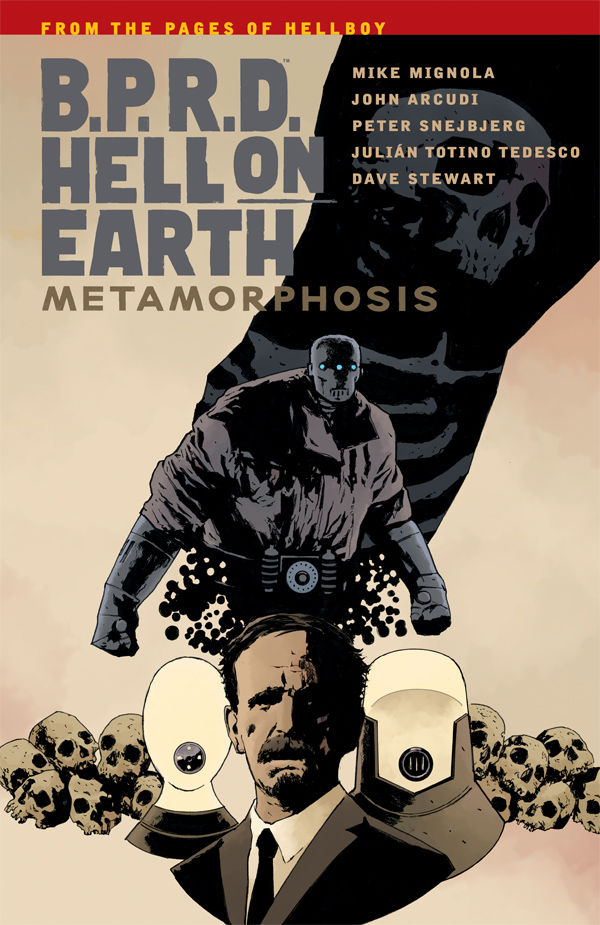 Johann and his troops take on an easy assignment destroying a monster. But things go bad when the civilians protecting it fight back and the Bureau agents turn against Johann, leading to a traumatic turning point in the ghost agent's career. This volume collects B.P.R.D. Hell on Earth #130-#134. 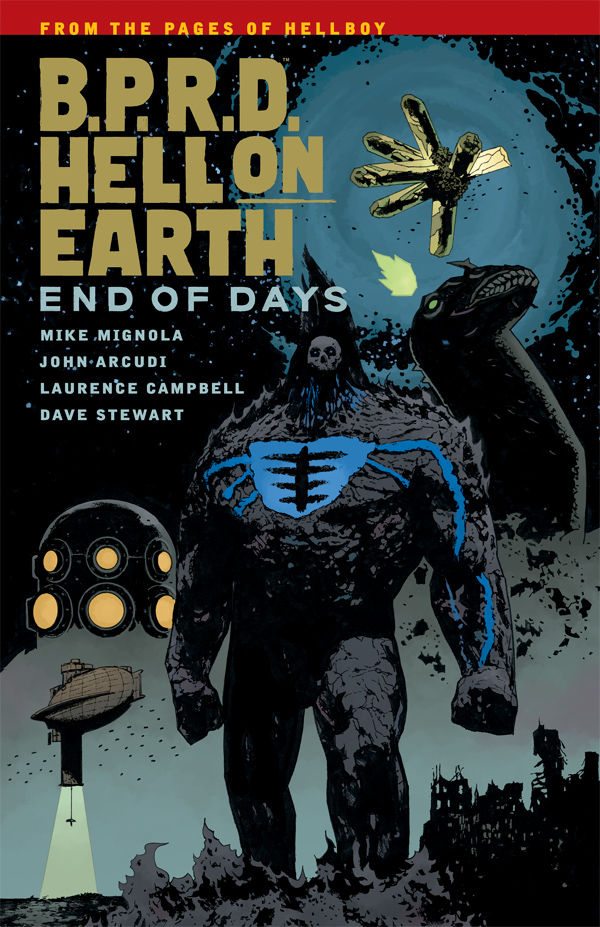 The Hell on Earth as we know it comes to an end. In a drastic change, one of the most terrifying creatures in existence has been released. Can the BPRD defend the world-and humanity-or is this finally the end? This volume collects B.P.R.D. Hell on Earth #135-#139. 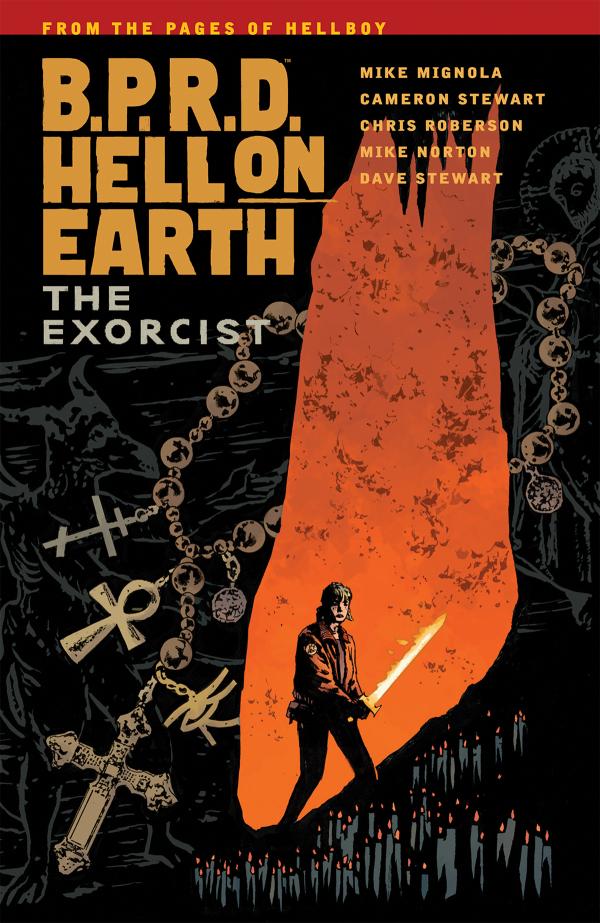 BPRD field agent Ashley Strode attempts to purge a demon from a hundred-year-old exorcist, utilizing a deadly rite that sends both of them into a spiritual hell. When she returns, her commitment to fighting the forces of evil in the world leads her to a rural town where a demon-worshiping cult is believed to be kidnapping children. Collects B.P.R.D. Hell on Earth: Exorcism #1-#2 and B.P.R.D. Hell on Earth #140-#142. 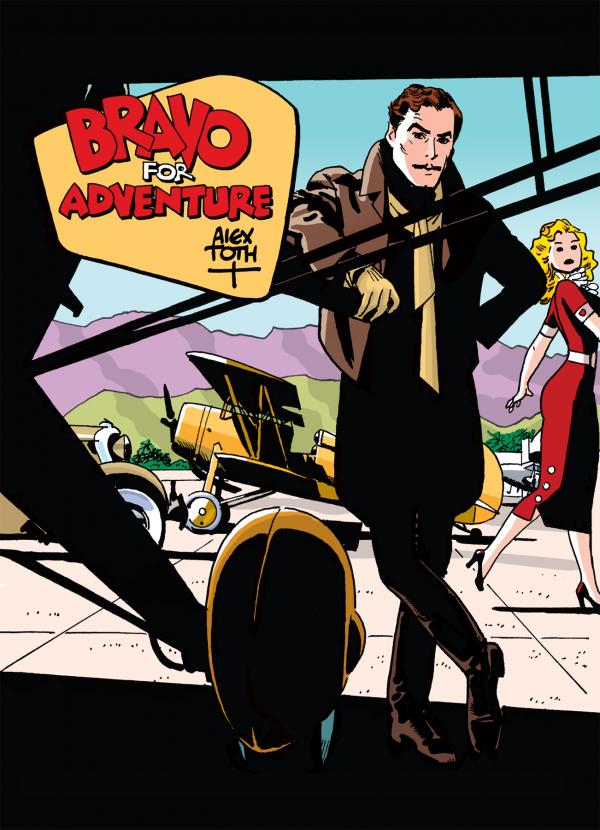 Advance solicited for June release! First time in trade paperback! Alex Toth's magnum opus contains all three of The Genius's stories starring Jesse Bravo, knock-about pilot and reluctant swashbuckler. Also included are rare pencil roughs, preliminary drawings, and story fragments, as well as samples of Toth's own coloring for an edition that never saw print, and of the coloring for what was intended to be Bravo's original 1975 first printing in France! 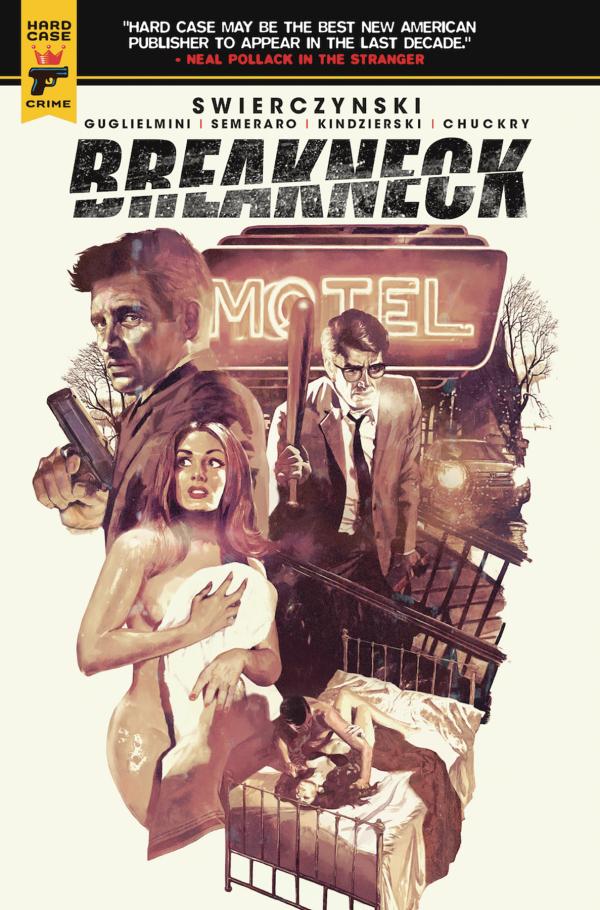 Hard Case Crime presents Breakneck - a new high-tension countdown thriller perfect for fans of 24, Homeland, and Falling Down, from celebrated crime and comics author Duane Swierczynski (Deadpool, The Punisher)! When white-collar everyman Joe Hayward confronts the government agent sleeping with his wife, he's plunged into a terrorist plot that will bring Philadelphia to its knees - with just two hours until everyone dies! Collects Breakneck #1-4. 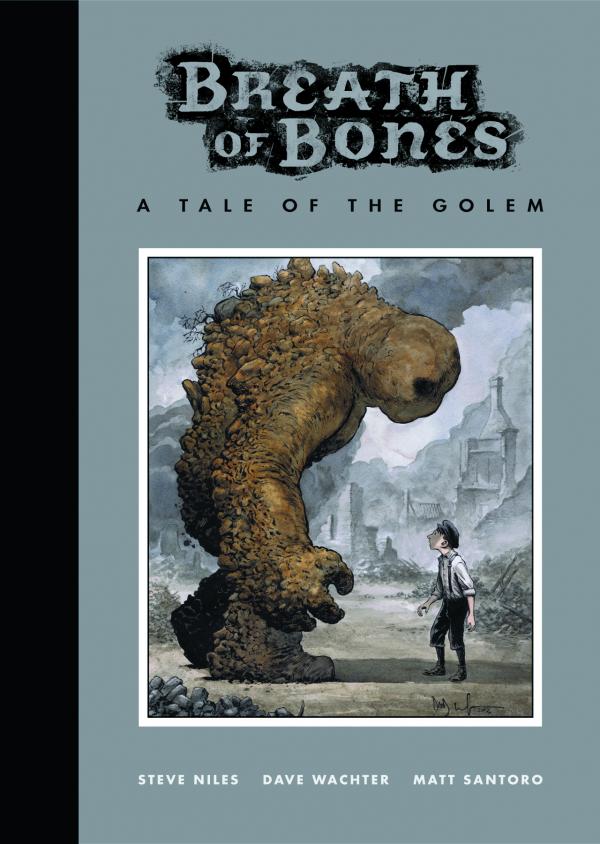 A British plane crashes in a Jewish village, sparking a Nazi invasion. Using clay and mud from the river, the villagers bring to life a giant monster to battle for their freedom and future. Collects the entire miniseries.